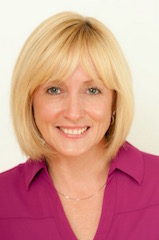 (January 5, 2017)  Tracy Caruso is thrilled to “return home” to work with colleagues and friends in New Hampshire’s broadcasting family.  Tracy is a Granite State native and award-winning broadcaster who began her radio career in 1991 at WFGL in Fitchburg, Massachusetts. She later worked at WORC in Worcester, Massachusetts before coming back over the border to her home state.

Over the years, Tracy built her radio resume on the airwaves at WMVU in Nashua, WKNE in Keene and later working on the mid-day, afternoons and morning shows for the Manchester Radio Group (WZID, WFEA, WMLL) in Manchester.

In the early 2000’s, while taking a break from radio to raise her small children, Tracy stayed close to her broadcasting passion, working as Production Manager for Al Sprague at BGG Advertising.  During that time, she served as an assistant to the NHAB.

In 2015, Tracy left her on-air radio career to join her husband, Scott Spradling, as a partner of the Spradling Group, a marketing and public relations firm based in Manchester, NH.  As of January 1, 2017, the Spradling Group signed on to provide management services for the NHAB. Tracy is proud to serve as the Association’s Executive Director.

Leave a Reply to Joe CollieCancel