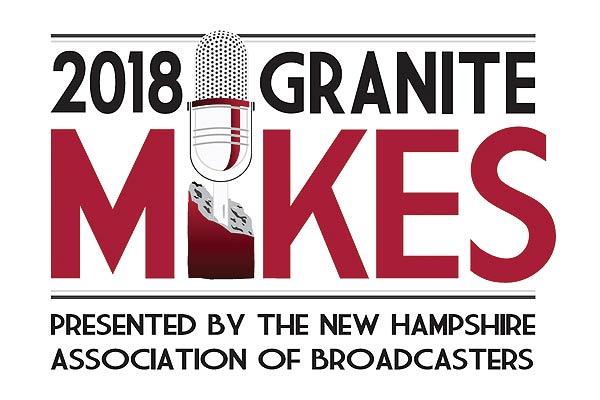 (November 9, 2018) – MANCHESTER, NH – New Hampshire broadcasters produced award-winning coverage of the opioid epidemic, state championship sports, severe weather and fun features focusing on everything from ice fishing to janitors. Television and radio personnel gathered last night to celebrate the best of the best at the 2018 Granite Mikes awards, presented by the New Hampshire Association of Broadcasters (NHAB). Dozens of stations were recognized, capped off by the award for Broadcaster of the Year, which went to Dan Mitchell of WKBK in Keene for his work on and off the air.

Mitchell, who has worked at WKBK for more than 30 years, has become a central figure in raising funds and awareness around many of the Monadnock Region’s most important causes, such as children’s health care, help for the poor and local amateur sports.

An “Above and Beyond” award was presented to volunteer Fred Portnoy of WNHN LP in Concord for his efforts to relocate the studios to a new location.

Individuals and stations submitted 261 entries in 20 categories. The work was judged by the Idaho Association of Broadcasters. WMUR TV was the big winner, taking several First-Place prizes and Merit Certificates. WGIR FM and WZID, both in Manchester, and WBNH LP in Bedford, received numerous First Place awards.

The radio and TV Stations of the Year were WLKZ in Wolfeboro and WMUR TV in Manchester.

Granite Mikes is on deck for October 29!

Save the date for the Granite Mikes- October 22!