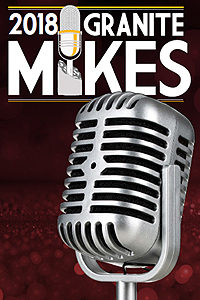 (October 8, 2018) – New Hampshire’s radio and television professionals will gather in Manchester on Thursday, November 8 for their annual convention. Two seminars are planned for the afternoon and the highlight of the day will be the annual Granite Mikes awards show. In addition to individual and team recognition, the prestigious Station of the Year and Broadcaster of the Year recipients will be revealed.

This year’s event will be held at the Executive Court Banquet Facility at 1199 South Mammoth Road in Manchester. For the convenience of attendees, the Best Western Plus Executive Court Inn is on the adjoining property for those who wish to stay overnight. Motel reservations can be made at 603-627-2525.

Broadcasters can choose which of two seminars they wish to attend from 1:30-5:00 p.m. Jim Mathis – The Reinvention Pro, will explain how new and experienced account executives can learn to communicate and act proactively. Jim presides over a humorous, entertaining and interactive exchange about selling to individuals in their best buying language. Attendees will explore essential tools for contacting, calling, presenting and closing more sales delivered in a “Dr. Phil meets Jeff Foxworthy” style presentation. At the same time, veteran broadcast executive and programmer Steve Goldstein will present “Podcasting & Smart Speakers – New Platforms, New Strategies.” Steve Goldstein is CEO of audio innovation firm Amplifi Media, which works with top media companies and podcasters advising on digital content strategy, activation and development for on-demand audio (podcasting). Steve has worked for the NBC Radio Network and ABC Radio and is well known in New Hampshire as a founding partner of Saga Communications.

A social hour begins at 5:00 followed by a buffet dinner. Entertainment will be provided by comedian Juston McKinney. Known for his multiple performances on The Tonight Show, his Comedy Central specials, and consistently selling out theaters, Juston grew up living on the border of New Hampshire and Maine but in the late 1990’s he moved to NYC to pursue a career in stand-up comedy. Juston wrote, created and starred in the web series Hosed, about a volunteer fire department in the fictitious town of Effingwoods, NH. The show, which was developed along with Denis Leary/Apostle was sold to IFC.

Here’s how to get your invitation | here’s a registration form.