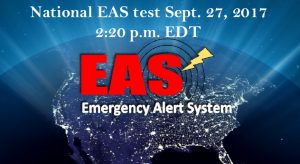 (December 11, 2017) – Broadcasters seem to have performed better on the 2017 National Periodic Test of the Emergency Alert System than they did in 2016 according to a new report issued by the Federal Communications Commission.

On September 27 more than 19,000 American radio, TV and cable licensees momentarily interrupted programming for a national test of the alerting mechanism.  That included participants in all fifty states and U.S. territories.  While the number of stations was about 1300 less than the 2016 test, some of that is attributable to the widespread damage resulting from hurricanes near Houston, Miami and Puerto Rico in the weeks just prior to the test.

A total of 207 stations aired the test in Spanish, which is more than double the 2016 number.  You can read the complete report here.