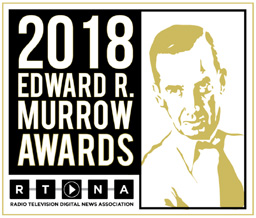 It was announced in May that NHPR had won four awards in this year’s national competition run by the Radio Television Digital News Association.  The new announcement brings additional prestige to NHPR.  WTOP FM in Washington, D.C. was the only other Overall Excellence winner this year.

The national awards will be presented October 22, 2018, at the RTDNA Edward R. Murrow Awards Gala at Gotham Hall in New York City.