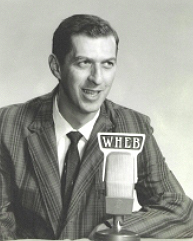 Howard Leonard Silverman, also known as Howie Leonard, of Portsmouth passed away on March 17, 2022 in Silver Spring, Maryland. Howard was born on February 20, 1926 in Haverhill, Massachusetts to David and Rose Silverman, grew up in Lawrence and was preceded in death by his parents and his sister Norma and brother Gerald.

He served in the United States Navy during World War II as a Navy Signalman. He met his wife Lolly shortly thereafter and was married on June 25, 1950. They were married for 28 years before Lolly passed away in 1978.

He is survived by his son Steven and his wife Sheila of Silver Spring Maryland, and grandchildren Jordan Silverman, Sage Bennett, Kaden Bennett, and Lane Bennett as well as several nieces and nephews, their spouses and children.

Howard had a 50 year career in radio as a disc jockey and program director working at several stations throughout New England. He started in 1948 after graduating from Curry College in Boston.  His first on-air job was at WALE Fall River.  In April 1951 he moved to WLAW Boston and was there for two years before moving to WPOR Portland.  In February 1957 Howie relocated to WLOB in Portland, where he stayed until April 1962 when he began a short stint at WLAM Lewiston.  He joined WHEB Portsmouth in July 1962 and had a long run as program director/operations manager.  He left radio in May 1973  to become executive director of the Hampton Chamber of Commerce.  After leaving the Chamber in November 1980, Leonard joined the sales team at WKXR A/F Exeter.  In December 1982 he rejoined WHEB when the AM split from an FM simulcast and went with as short-lived MOR format.  He concluded his broadcast career as a newscaster at WOKQ Dover

He was a Past President of Temple Israel in Portsmouth, a member of the Portsmouth Rotary Club, and a past member of AFTRA.

Howard was an avid jazz fan counting Dizzy Gillespie, Count Basie and Ella Fitzgerald among his favorites. He was a huge sports fan staying loyal to the Red Sox, Bruins, Celtics, and Patriots from when he was a young boy throughout the lean years and, finally, the championships.

Howard enjoyed good food, particularly going to Bubba’s for pastrami on rye and to Petey’s for fried clams. Howard‘s favorite ice cream was black raspberry which he enjoyed at Brown’s in York where he was often accompanied by Polly Emery who he spent many years with before her passing in 2008.

Services: A graveside service will be held at the Temple Israel Cemetery, Banfield Road, Portsmouth on Tuesday, March 22, 2022 at 2 P.M. Memorial contributions may be made in the name of Howard and Lolly Silverman to the Temple Israel Hebrew School Fund,200 State St., Portsmouth, NH 03801. For online condolences, visit: www.jvwoodfuneralhome.com. Arrangements are under the direction and care of the J. Verne Wood Funeral Home – Buckminster.