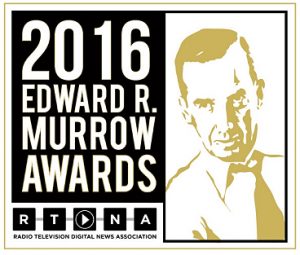 Two New Hampshire stations have been recognized regionally for outstanding achievements in electronic journalism.  The national Edward R. Murrow Award winners will be announced in June.

The awards are named for the longtime CBS radio and television reporter and have been presented each year since 1971 by the Radio Television Digital News Association.

Congratulations to NHPR and WMUR for their fine work!