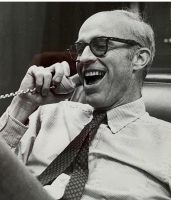 (September 23, 2019) – The New Hampshire Association of Broadcasters was sad to learn of the death of longtime New Hampshire radio station licensee Elmer H. “Hal” Close.  He died of complications of a stroke on September 10 at the age of 82.

A native of Toledo, OH, Hal was raised in New Hampshire where his father, Joseph K. Close, was president and general manager of WKNE AM/WNBX FM in Keene.  He earned a law degree at Harvard in 1961  and practiced law for a time before joining the family business after his father’s death in January 1970.

During the 1970s Hal served four terms in the New Hampshire House of Representatives.

The Close family also operated Greylock Broadcasting Co. in Massachusetts, licensee of WBRK AM/FM in Pittsfield.  In 1981 he was elected to a two-year term on the board of directors of the National Association of Broadcasters, serving on the congressional liaison and small market radio committees.

In 1984 the family sold the Pittsfield stations.

For a time Hal served as chairman of the New Hampshire State Emergency Communications Committee, helping to oversee the old Emergency Broadcast System.

In the aftermath of the Telecommunication Act of 1996, many stations nationwide changed hands.  In July 1987 Hal purchased WPNH AM/FM in Plymouth from Richard F. Morse, Jr., for $1,350,000.

Close made a bid to acquire WJYY Concord and sister station WRCI Hillsborough in a 1993 bankruptcy proceeding, but was ultimately unsuccessful.

In July 1995, Hal purchased WEMJ AM in Laconia from Broadcasting Associates Inc., headed by Robert Tole, for $171,000.

A memorial service will be held at Dublin Community Church on Saturday, Oct. 5, at 2 p.m.